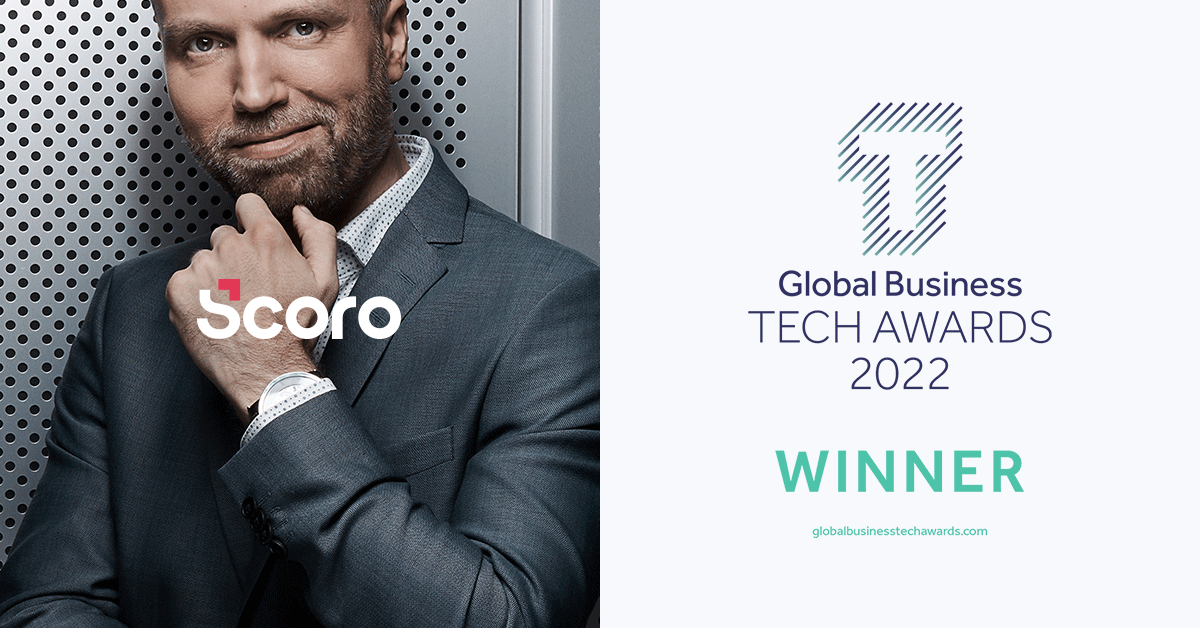 Scoro recognized as Tech Company of the Year and CEO, Fred Krieger, as Entrepreneur of the Year

​​Scoro, the leading work management software platform for agencies, consultancies and professional services firms has today announced winning in two categories at The Global Business Tech Awards. The firm was awarded Tech Company of the Year, as well as Scoro’s CEO and Founder, Fred Krieger, being named as Entrepreneur of the Year. The judges also awarded Scoro one of four silver medals on the night in the SaaS Company of the Year category.

Taking home the title of Tech Company of the Year marks Scoro’s place among firms with a turnover of up to £30m/$40m that are committed to innovation. Scoro was credited by the judges for glowing customer feedback that demonstrated statistically how, since implementing Scoro, customers are reporting huge improvements across multiple business processes, saving time and money.

The judges also called out Scoro’s determination towards clear and measurable objectives, with a focused ambition that drives everything the company does. Scoro’s core business philosophy is based on the principle that ‘time is money’, and as such the business has done what other work and project management software firms don’t do – correlate time efficiency with profitability.

Unlike other software firms which focus more narrowly on project management, Scoro differentiates itself by offering an end-to-end work management solution encompassing the entirety of business operations within a single, holistic system.

The second award of the evening recognized Scoro’s own founder and CEO, Fred Krieger, as Entrepreneur of the Year for his unwavering commitment to helping businesses better understand how to harness the value of time. Fred, who is also active in the music industry, has a mission statement to combat the ‘weapons of mass distraction’ that cause organizations to squander resources. In 2021, he delivered on this by pioneering the role of a Chief Time Officer; securing £18m in investor funding; and growing Scoro’s revenue by 79% across its three core international markets. This award solidifies Fred’s place among the visionary tech CEOs of today.

In addition, a major part of what set Fred apart from the other shortlisted entrepreneurs was his focus on making Scoro a company committed to change and forward thinking. Scoro has not only maintained employee happiness, it also boasts a consistent 50:50 gender ratio before, during, and after rapid expansion to 130 staff, something that many tech firms struggle to achieve.

On winning at the awards, Fred commented: “It’s a proud moment to see Scoro held in such high regard at these important industry awards and to personally win Entrepreneur of The Year is a huge honor. When I founded Scoro, I was driven by a determination to reinvent how companies understand and manage time, so I’m delighted this issue is becoming widely recognized, and salient in the new, hybrid, flexible world of work.”

Scoro Steps into Fall with a Fresh Sweep of Wins